No amount of alcohol is safe but there are things you can do to reduce the health impacts of drinking.

Avoiding champagne, drinking beer before wine and making sure you buy the third round could all stop you getting carried away and drunk, Professor Nutt says.

In his new book he reveals a list of handy habits which he follows to stop him getting too drunk and therefore to try and limit the health damage he suffers from drinking.

The alcohol guru admits to owning his own wine bar in Ealing, west London, and drinking – sometimes too much – but says alcohol would be outlawed if it were discovered today.

As well as health dangers like brain and liver damage and mental health problems, it causes social problems including domestic violence and drink-driving.

An synthetic alcohol alternative he is developing in the lab, which apparently gets you drunk without the hangover or body damage, is proving hard to sell to investors, who appear uninterested in tackling the British love affair with booze, he said.

Professor David Nutt said avoiding champagne, which has bubbles that get you drunker faster, is one good way of limiting the damage alcohol does to your body (stock image)

‘There is no level of alcohol consumption that is without risk,’ Professor Nutt writes in his new book Drink? The New Science of Alcohol and Your Health.

He says it is up to the individual how much they want to put their health at risk.

Scientific estimates vary – a European Commission report says as little as a pint of lager a year could raise cancer risk, while the NHS’s recommended weekly maximum is 14 units, which is equal to six pints of beer or 10 small wines.

But most people will continue to drink even knowing it could harm their health.

Professor Nutt, acknowledging this and counting himself among them, has revealed some top tips for how to stop yourself drinking too much.

He says to avoid champagne, because the bubbles make you drunker faster, Times 2 reports.

Don’t let other people top up your glass and never open a second bottle, he adds – these are physical rules you can set beforehand to stop you going too far. 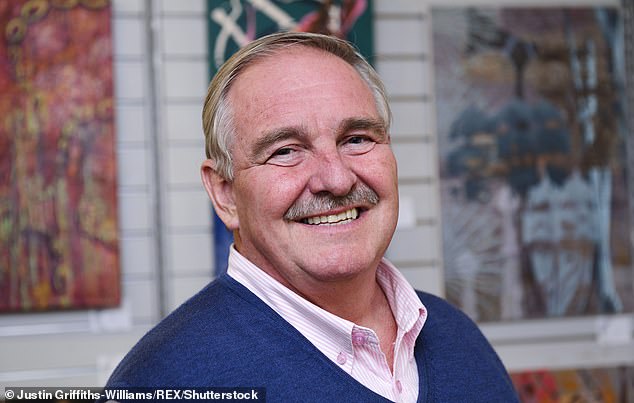 Professor Nutt owns his own wine bar with his daughter in Ealing, west London, and says he drinks alcohol himself but is aware it’s bad for him

He says that if he plans to drink wine he will have a pint of beer, which is weaker, beforehand to fill himself up and leave less room for wine.

And if you’re buying rounds you should aim to go third, so you can have two alcoholic drinks then buy a non-alcoholic one for yourself to slow things down without facing peer pressure or being talked out of asking for a soft drink.

This may be because the foods – such as crisps and peanuts, which are popular fare in pubs and bars – make you thirstier and tempt you to drink more.

Professor Nutt, who says alcohol is so loved because it makes people feel good and more sociable, has become dangerously ingrained in society and easy to get hold of.

Huge super-strength bottles of cider, for example, can be bought in off-licences for just a few pounds.

‘If you see it as a drug then you think of it more as a treat or something that you plan,’ he said.

His work to develop Alcarelle, a synthetic substitute for alcohol which has the same effects but without the hangover, is proving successful but unpopular with potential investors.

He told The Times: ‘In practice people aren’t interested. I find it really quite disappointing.’

Alcarelle works by stimulating the same parts of the brain as alcohol but without pushing the same amounts of toxic chemicals through the liver and organs.

It leaves people drunk for 45 minutes and then disappears without a trace.

‘The effects of alcohol are complicated,’ he told The Guardian last year. ‘But you can target the parts of the brain you want to target.

‘The industry knows alcohol is a toxic substance. If it were discovered today, it would be illegal as a foodstuff.

‘The safe limit of alcohol, if you apply food standards criteria, would be one glass of wine a year.’

Many mesh implants used by the NHS ‘have no safety evidence’

Dengue across the Mersey! Health chiefs warn the NHS to prepare...